(En) The Colours of Armenia

(En) Arrival at the Yerevan airport. Meeting with guide and driver.
Transfer to the hotel. Accommodation. Free time.
Overnight in the hotel in Yerevan. 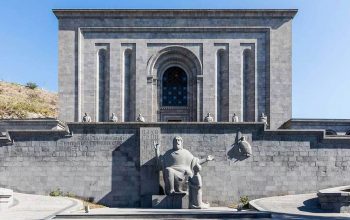 (En) Yerevan. Breakfast in the hotel.
Visit to Matenadaran (a book depository) – one of the world’s most ancient libraries. Its collections comprise ancient Armenian books and miniature paintings that have gained worldwide fame. Here about 18.000 manuscripts are kept, which are included in UNESCO world Heritage list. 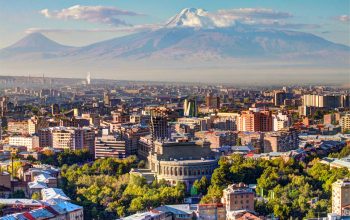 (En) Yerevan is the capital and largest city of Armenia, and one of the world’s oldest continuously inhabited cities. Yerevan is older than Rome (one of the oldest capitals in the world) for 29 years. Situated on the left-bank (along the river Araks) part of the Ararat valley Yerevan offers breathtaking views of holy mountain Ararat. The city is the administrative, cultural, and industrial centre of the country. It has been the capital of Republic of Armenia (1st Armenian Republic) since 1918, the thirteenth in the history of Armenia, and the seventh located in or around the Ararat valley. The history of Yerevan dates back to the 8th century BC, with the founding of the fortress of Erebuni in 782 BC by king Argishti I at the western extreme of the Ararat plain. Erebuni was designed as a great administrative and religious centre, a fully royal capital. In 2018 Yerevan celebrated its 2800th anniversary.
After exploring the central part of Yerevan the tour will be continued by bus. 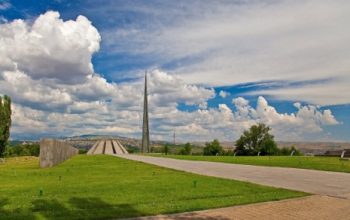 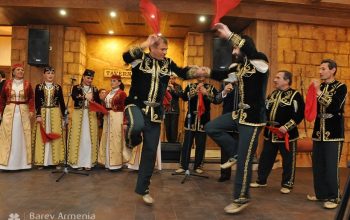 Overnight in the hotel in Yerevan. 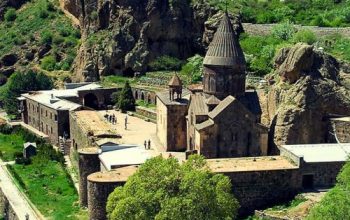 (En) Yerevan. Breakfast in the hotel.
Heading to Kotayk region where you are going to visit monastery Geghard cut out of the rock (13th c) and Garni the only type of pagan temple across the Caucasus and the former Soviet Union (2nd half of 1st c AD).
Monastery Geghard is one of the most famous medieval monasteries in Armenia. The complex of medieval buildings is set into a landscape of great natural beauty, surrounded by towering cliffs at the entrance to the Azat river valley. According to the legend the monastery housed the spear which had wounded Christ on the Cross and from which comes its present name Geghardavank (the Monastery of the Spear). It was allegedly brought there by the Apostle Thaddeus, first recorded in a document of 1250. The church with its surrounding structures is included in the UNESCO World Cultural heritage List. 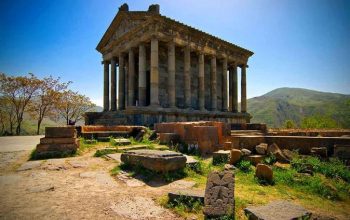 (En) Open-air museum of Garni pagan temple is dedicated to the God of the sun Mithra. It is the only surviving monument of the Hellenistic period in Armenia. The temple was built in the 2nd half of the 1st c AD during the reign of king Tiridates I. The temple was completely destroyed during the earthquake of 1679. It was restored in the 1970s, using the surviving fragments and carving the missing ones renewed. The territory of the fortress, that was used as a summer residence of Armenian royalty, included the palace, the royal bath – house, the garrison barracks and other structures that did not survive. Garni pagan temple has unique design and is the only type of temple across the Caucasus and the former Soviet Union.

Drive back to Yerevan. Overnight in the hotel in Yerevan.

– In Garni village you will have an opportunity to watch the process of baking Armenian bread – lavash (inscribed in UNESCO Representative List of the Intangible Cultural Heritage of Humanity).The price for the event is 50 EUR per group. 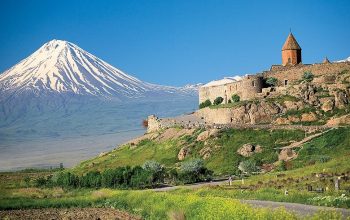 (En) Yerevan. Breakfast in the hotel.
Drive to Ararat region.
Visit to Khor Virap monastery. Khor Virap (meaning “deep pit” or “deep well”) is an Armenian Apostolic Church monastery located in the Ararat valley in Armenia. The monastery was host to a theological seminary and was the residence of Armenian Catholicos. Khor Virap’s notability as a monastery and pilgrimage site is attributed to the fact that Saint Gregory the Illuminator, was initially imprisoned here for 13 years. A chapel was initially built in 642 AD at the site of Kirat Virap by Nerses III the Builder as a mark of veneration to Saint Gregory. Over the centuries, it was repeatedly rebuilt. In 1662, the larger chapel known as the “St. Astvatsatsin” (Holy Mother of God) was built around the ruins of the old chapel, the monastery. Now, regular Church services are held in this church. It is the most visited pilgrimage site in Armenia. 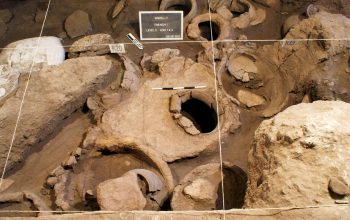 (En) Drive to Vayots Dzor province, village Areni. Here the most ancient winery in the world Areni-1 is located. This winery had been discovered as a result of excavations done in 2007-2008. 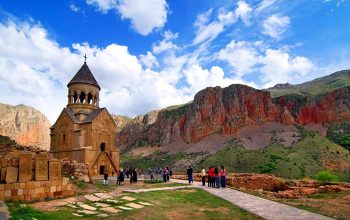 (En) Visit to Noravank (meaning “New Monastery” in Armenian) – 13th century Armenian monastery, spiritual centre of Orbelyan prince dynasty. The monastery is best known for its two-storey Surb Astvatsatsin (Holy Mother of God, Burtelashen) church, which grants access to the second floor by way of a narrow stone-made staircase jutting out from the face of building. After exploring the monastery you will have a lunch in a hunting restaurant in the cave.
Then continue your way to Goris town. Here you will have free time for rest.
Overnight in the hotel in Goris. 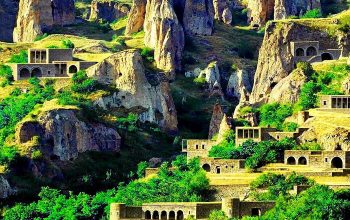 (En) Goris. Breakfast in the hotel.
After breakfast start your trip to Khndzoresk – a cave village with a large cave system. There are a very large number of caves, although most of them are manmade and rather small. 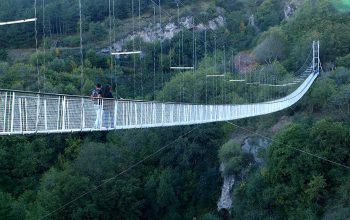 (En) There is a 160-meter long swinging bridge that was built using nothing more than local funds and labor in 2012 and which shakes with every footstep. The new bridge connects Old Khndzoresk and New Khndzoresk, the modern village, linking Armenia’s history with the present both figuratively and literally. 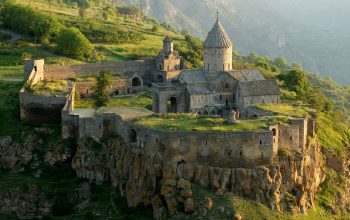 (En) Continue to Tatev monastery – 9th century monastery located on a large basalt plateau near the Tatev village in Syunik Province in southeastern Armenia. The monastic ensemble stands on the edge of a deep gorge of the Vorotan River. Tatev is known as the bishopric seat of Syunik and played a significant role in the history of the region as a centre of economic, political, spiritual and cultural activity. In the 14th and 15th centuries Tatev Monastery hosted one of the most important Armenian medieval universities, the University of Tatev, which contributed to the advancement of science, religion and philosophy, reproduction of books and development of miniature painting. The monastery is the “best-known site” in Syunik. In 1995, the monasteries of Tatev, Tatevi Anapat and their adjacent areas of the Vorotan Valley were added to the list of World Heritage Sites of United Nations Educational, Scientific and Cultural Organization (UNESCO). 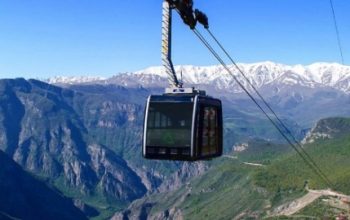 (En) Visiting Tatev you can take the world’s longest ropeway called “Wings of Tatev”. A cableway connects Tatev village to Halidzor village. It was included in the Guinness World records as the world’s “longest non-stop double track cable car”. 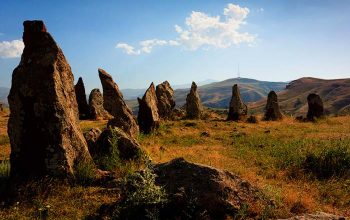 (En) Drive to Yerevan. On the way visit Karahunj (also called Zorats Karer) – a prehistoric archaeological site near the city of Sisian in the Syunik province of Armenia. It is alike famous Stonehenge in Wiltshire, England and Carnac Stones in Carnac, France. The phrase Zorats Karer is translated from Armenian as ‘Worrier Stones or Stone Army’. The stones make whistling sounds on a windy day, presumably because of multiple reach-through holes bored under different angles into the stones in prehistoric times. Total area of archaeological site is approximately 7 ha. In total 222 registered standing stones are up to 2.8 m tall and approximately 10 tons heavy. About 84 of the stones feature a circular hole, although only about 50 of the stones survive. There are only two similar structures in the world – Stonehenge in England and Carnac stones in France. But the point is that the circular holes of Zorats Karer make this monument unique and even the oldest one among the similar monuments. 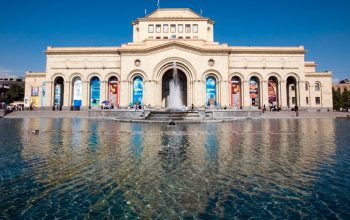 (En) Yerevan. Breakfast in the hotel.
Visit to National Gallery of Armenia – country’s major art gallery. The collection displayed in the fifty-six halls gives an idea of the history of the national fine art and decorative-applied art as well as presents world art from ancient times till present day. In the halls of European, Russian, Armenian and Oriental art viewers can get acquainted with works by Aivazovsky, Sureniants, Sarian, Serov, Kandinsky, Donatello, Rodin, Chagall and other prominent artists. 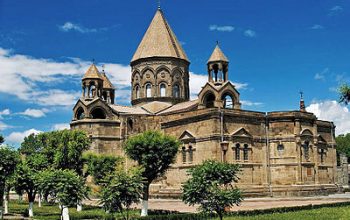 (En) Visit to Echmiadzin – the spiritual centre of the Armenian Apostolic Church and the residence of the Catholicos of All Armenians. Visit the Mother Cathedral of Holy Echmiadzin – one of the most ancient and the most beautiful examples of Christian architecture. It was founded to commemorate the proclamation of Christianity as the national religion of Armenia. The original building was completed in 303 AD. The Echmiadzin Cathedral is the seat of the throne of the Supreme Patriarch and Catholicos of All Armenians. Since 2000, it is a UNESCO world heritage site.
Visit museum «Treasures of Echmiadzin». 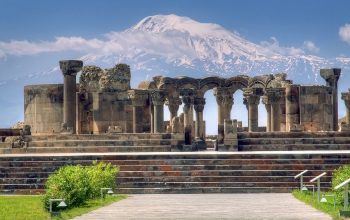 (En) On the way back to Yerevan visit Zvartnots – 7th century centrally planned aisled tetraconch type Armenian cathedral built by the order of Catholicos Nerses the Builder from 643-652. Now in ruins, it is located at the edge of the city of Echmiatsin in Armavir Province of Armenia. Zvartnots remained standing until the end of the 10th century, but historical sources are silent as to the cause of its collapse. A close copy of the cathedral was erected in Ani by Tiridates the Architect under the reign of Gagik I Bagratuni during the final decade of the 10th century. Zvartnots is added to the list of World Heritage Sites of UNESCO. 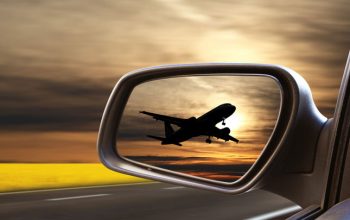